I’ve Defrauded and Deluded Myself, I Am Not Me, But I AM

We go through life thinking we know who we are and why we do what we do, but like Actors who start believing they are the sum of their Press Clippings and the heroic characters they play, we are frauds. It took a simple but powerful video to teach me the truth, something I once knew, but lost sight of.

I once was lost, but now am found.

by H. Michael Sweeney
copyright © 2013, all rights reserved. Permission to repost hereby granted provided entire post with all links in tact, including this paragraph, are included.

Whre can I get help when no one believes my story?

A note of apology: a technical glitch with wordpress refuses to let me format the document correctly, making it a little difficult to separate paragraphs. No matter what I do, it displays as intended in preview mode, but not in actual URL access. I regret any inconvenience. 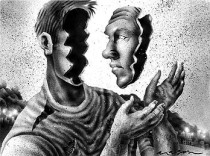 Introspection: the most valuable tool an investigative author could possibly have (examine yourself, first). From heartofaleaer blog (click)

I’m talking about me, H. Michael Sweeney, aka the Professional Paranoid, activist author, and consultant on privacy/security, and abuse of power topics. People come to me for help all the time, and I’ve started to believe in the value of my advice as much as they hope it to be of value in their desperation. Well, my advice may be good some of the time (more often than not, I have always thought, based on feedback), but even so, I’ve not quite been offering the best advice, in the best possible way.

This self examination also translates to my abuse of power issues of which I so frequently write, as everything I tend to blog about is so much in parallel to the basic aspects of things now clearly revealed to me because of simple but powerful video, that I’m hoping those who read my blog posts as activists, will see that parallel as well. It’s not just about me, its about everything in the World and how we deal with it. Let me explain by first going back in time. Some of you who have read my material before may know some of this, but as Paul Harvey used to say, its time “For the rest of the story…”