25 Questions No One Has Asked About Aurora Shooting (pt. 2)

You can always spot a conspiracy at work… was james holmes a patsy by DOD or CIA? whenever you see evidence of a cover up in play

Our review continues from PART I, by H. Michael Sweeney, Copyright © 2012 all rights reserved. No reproduction permissions will be granted for the first 90 days. Links only, please.

In review: This in-depth series of posts will reveal startling new investigative issues for the first time, anywhere. The detail required to make concise arguments on a long list of critical elements forces it to be offered in installments. You may wish to subscribe to be sure you do not miss one along the way. Doing so, you will discover:

James Holmes was a patsy

QUESTION 8: Who warned people not to use the EXIT in theater 8, and why? Tim McGrath mentions it, and I’ve seen but lost track of one other witness who confirmed the same point. Tim says the people in 8 were panicking and trying to leave. Toward the end of the clip he states someone entered the theater from the Lobby area and warned everyone not to go outside because the shooter was outside. Excuse me? How would they know this? If there was, WHO was it, because according to this witness, shooting was still going on in theater 9? Could this be misinterpretation or misunderstanding? I’d be open to the suggest except that it also happened in theater 10…

QUESTION 9: Who warned people not to use the EXIT in theater 10, and why? At 2:50 AM Channel 9 coverage has a witness from (by deduction) theater 10 who describes events while the shooting was going on in theater 9.  We really need to pin down if it was theater 10, so here is the deductive logic thread: Someone came into the theater from the left entrance, and warned them not to go outside, again while shooting was still taking place. Theater 9 would be to the left of theater 10, and theater 7 would be the left of theater 8. It would not be logical to presume someone further away from events (nearer to theater 7) to either be criminally involved or otherwise inclined or able to perceive a need for a warning. Any such person would need be closer, so it had to be theater 10. So again, who and why… would someone issue a warning without basis for such knowledge?

QUESTION 10: Why were bullets going through the walls into both theater 8 and 10? A look at the theater diagram from the Denver Post reveals that it would be logical for some rounds to pass through into 8, but there are only two ways it could have happened in theater 10. Either there was a second shooter unseen because people were attempting to hide or flee with their backs to the screen, or James deliberately turned his weapon on the wall. It is also possible any second shooter went behind the screen to appear in the dark on the far side, making them hard to see, but only if they used a silencer to completely suppress flash. This would create a distinctive sound witnesses did not report, as far as we know. Only in a cross fire situation should bullets logically enter 10, as shooting the wall is illogical. Why would James waste rounds to shoot the wall, especially since his shooting spree was ended prematurely when his gun jammed? Has anyone counted the bullet holes and compared to the half-empty magazine?

QUESTION 11: Who wore the second gas mask and used the second rifle found behind the theater? We have multiple Police statements which confirm James was found in his car and had with him in his car, a gas mask, and three guns: an AR-15 rifle, a Remington 870 shotgun, and a Glock handgun, with a second handgun and the high-capacity drum canister for the AR-15 discarded inside the theater.

Yet we have photographic evidence, Police radio traffic (18 minutes in), and additional statements to the press which prove a second mask and weapon were found lying on the ground behind the theater. The gun was at the threshold of the EXIT door, and the gas mask was found all the way at the end of the building, some 150 feet away from the EXIT and Jame’s car, where ‘the shooter’ is first reported being seen. The gas mask is part of a whole other series of questions which are the most troubling, of all. So why did James bring but not use two rifles, and two gas masks? And why does that weapon show a standard magazine (the light gray forward appendage). We were led to believe he quit shooting because his drum magazine jammed (which he left inside). Curious, as I would have thought the gun would be sans clip of any kind. 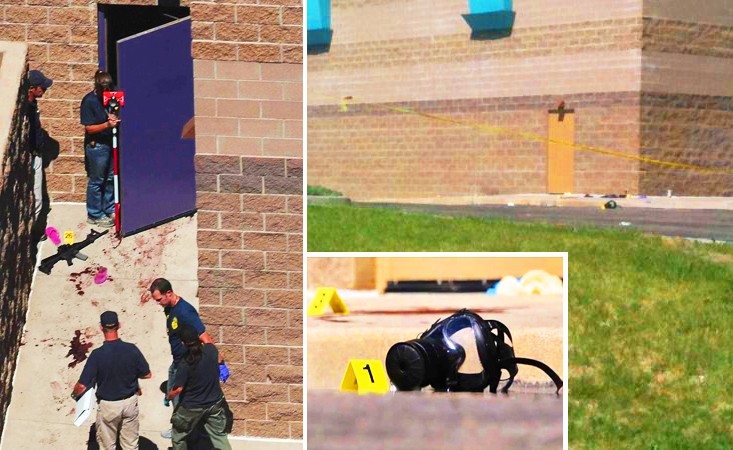 QUESTION 12: Why did the shooter not shoot the first and most logical victim? Jennifer Seeger clearly describes on ABC, a rifle being the first gun used to shoot into the air, and then it was leveled at her, but the shooter paused and did not shoot. She dropped to the ground and he instead opened fire on the crowd behind her. The clues to the answer as to why may lay in the next few questions.

QUESTION 13: Why does one witness says the first gun used was a rifle, and another a shotgun? We know he had both a Remington 870 shotgun and an AR-15 rifle with him. Both witnesses state the gun used was aimed directly at them, and both were within a couple of yard’s distance of the shooter and near to each other, and both took cover quickly. There are several other questions regarding these accounts, but the bottom line is that there is both a visual difference in the appearance of such weapons, and a stark difference between them their sound when fired. It is inconceivable that one can misidentify a shotgun as a rifle some mere feet away, especially once fired. Does the 870 shown at right look like a rifle, to you? Does the rifle look like a shotgun?

Which is which? Is it that hard to tell? What about the sound difference?

We have already examined Jenifer Seegar’s account. Here is the shotgun account by witness, Pierce O’Farrell, in a Channel 9 report, In point of fact, he was immediately shot at and wounded by shotgun, twice — once before being able to gain cover, and the second while he lay low.  All witnesses seem quite believable taken on their own, but I find a shooting victim with medical treatment confirming their story more credible than someone unscathed. Why two distinctly different accounts? Again, other questions may hold the answers…

QUESTION 14: Why did several witnesses stick around for more than a day and well into the night and even the next day after the shooting to be interviewed endlessly by local and national media, to include multiple appearances on a given media outlet? I raise this question because they both tended to use the same individualized phrases and hand gestures over and over, and both emphasize a lone gunman. In some cases, the cameras seem rather far back to insure we see the gestures. In fact, one of them goes overboard in his efforts, consistently waxing emotional to the point of tears. More to the point, the conflicting facts cited above play into the matter, and may be why more than one ‘conspiracy theorist’ has suggested these are paid actors intending to Wag-the-Dog.

Here is the man, Chris Ramos, on CNN. This is him on ABC. The others are Jenifer Seegar and her friend from the ‘rifle’ account just spoken of. She is seen here on ABC, and here on CNN. Her companion who frequently appears with her but who hardly speaks, becomes a kind of ‘silent confirmation’ to cement the reality of her statements. If these habitual appearances are not a Wag-the-Dog plot element, I’d like to know what they really are? Seegar’s not being shot and not knowing which weapon first was used suggests she was not actually present — but if that’s true, then the only way she could have known about the first shot being in the air would be if she was a participant with prior knowledge of the plan. There are yet other clues of Wag-the-Dog forces in play, as seen next.

QUESTION 15: How did CNN’s Wolf Blitzer manage to so quickly have available a slick 3-D computer-rendered, fully touch-screen interactive replay of the crime, and why was it altered between airings? His show, some 12 hours after the shooting, but only a few hours after witness accounts and Police statements useful for the purpose were known, provided the most comprehensive report yet available, and put EVERYTHING from the OFFICIAL  STORY into clear context. Find it here, the third video down in the group of smaller videos toward page bottom. How did they mange to have this super sophisticated technology ready to go so quickly, unless prepared in advance?

I am additionally concerned because subsequent use of the same presentation in a later program is altered. The first presentation shows only James’ entry via the EXIT and the aftermath (e.g., the kicking in the door first impression). The second shows someone going to the EXIT from within the theater to the EXIT door, depicting them LEAVING, which NO WITNESS HAS DESCRIBED, followed shortly by the shooter’s entrance (as if not expecting someone would end up recounting the man opening the door, and thus it does NOT show him returning from the door, but vanishing). Witnesses specifically describe the man from inside as NOT leaving the theater by the EXIT and a significant delay before the shooter arrives.

You see the altered version here at one minute into the CNN video.  This change took place after challenges to the ‘kick the door’ claims were taking hold on the Web, perhaps best exemplified by Alex Jones’ special report to that end earlier in the day. Yet the witness reports about the man opening the door (and NOT leaving) were known to media before even the first airing. Why was it not included in the first place if not Wag-the-Dog? Why was it subsequently altered to an INCORRECT depiction, later? Yet one more possible clue follows…

Was Aurora shooting a DOD or CIA operation?

The next installment asks these important questions: