The 33 Axioms of Fascism, part II 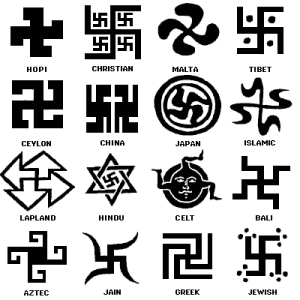 From Decode The Matrix: breakthecipher.wordpress.com

by H. Michael Sweeney,
copyright © 2011, ProparanoidPress, all rights reserved
permissions to reproduce available on request to pppbooks at comcast (net)

Read the Introduction (part I) here.

Fascism is not about Nazism…

which merely embraced it.

It is about the New World Order…

Thus the modern Fascist symbol is no longer the Swastika…

which must be concealed or disguised if used…

is now the Global spheres of corporate logos…

or Points of the Compass references…

which can be used openly as if code words.

As to the general nature:

Fascists do not believe in fiscal responsibilities, ecology, or humanity. They believe only in profits today, at any cost or expense to others. They shield themselves behind a Globalist Agenda pretending through shill Foundations and U.N. Charters to be ‘Economy Building,’ ‘Ghia Friendly,’ and ‘Third-World Enriching.’  These Code Words and many more like them veil the hidden manipulations within such ‘programs’ which actually work in the opposite direction in final analysis. One needs only review the actions of the World Bank to see examples.

2  Fascism most commonly favors or seeks world domination, its most perfect form being a One World Government

And what is a chief description of a One-World Government?  It has a single World Leader. What is such a person called historically?  The Antichrist. Is it any wonder then that Fascists historically and statistically speaking are by and large Satanic or Occultists? Hitler and friends sought World Domination by a single government. So did Communism. Before them so did the Illuminati. Since then, so has the modern Illuminati, the Globalists. They all called it a New World Order in one way or another, and they all shared the same basic planks or stepwise goals for achievement as spelled out by the Illuminati Plan.

A logo does not define a Fascist, but begs a closer look

It is a government by the empowered of the unempowered to usurp more power and wealth. The purest form would be a Corporate State, a TerraCorp, wherein all corporations were shareholders in a Holding Company which was the government. All law and regulation would be for their gain, at the people’s expense.

Control of the printing, availability, and value of Money by instruments such as The Federal Reserve was a primary goal established by the Illuminati Plan to establish a One-World Government they referred to as The New World Order. When you control currency in a country, you control the country. The international banking family of the Rothschilds has met this goal in virtually every Nation, and were a driving force in the establishment and continued control of the FED, which is a privately held corporation, not a branch of the U.S. Government. Mayer Amschel Rothschild has said, “Give me control of a nation’s money and I care not who makes the laws.” And why not. If you control money, you control EVERYONE and EVERYTHING indirectly.

Such control allows you to fund whatever you wish, heaping debt upon the masses. It allows Socialism, a tool to make the people both dependent upon and grateful to government. It allows a military of immense size and power. It allows everyone in charge to reap small fortunes at every turn, profiteering directly and indirectly from every Public Trough created by the Bureaucracy.

They do not care where the war is, the reason, or the outcome. Yes, it is important to them personally that they not get caught in the middle or see their own possessions destroyed. That’s something easy to arrange: just relocate the family and have the government pay for damages when you return. They only care that they get to loan money to both sides and profit from arms sales to both sides. The Rothschilds were famous for doing this, and it was in fact what empowered international banking in the first place.

Hillary Clinton, as described in my book set, Fatal Rebirth, profited handsomely by profits made through her modest investment in a CIA front operating in Canada which illegally sold U.S. arms to both sides of the Iran-Iraq war, one of the bloodiest of all history, and one with no victor, least of all American interests in the region. Wars can be used to punish or weaken a government which is uncooperative, and bolster those which do cooperate, and serves as a ‘patriotism’ tool for domestic control even in the face of severe domestic unhappiness with government which might exist. It can be used to justify Draconian measures and limit freedoms.

Profiteering is assured, generally used to fund black operations with no accountability and full plausible deniability. A War on Drugs forces the price sky high, and can be used to insure that sanctioned drug sales (CIA drug sales, in our case) is protected while unauthorized sellers (the kids running the border and the street gangs) get to go to jail. It increases crime to fund drug habits and allows for repressive laws and establishing large Law Enforcement Agency resources and infrastructure.

You render large populations ‘as lawbreakers’ who must otherwise behave out of fear of prosecution (they get off with a ‘warning’ or fine, but hence forth keep a low political profile). Wars are fought to control access to drugs. Vietnam secured S.E. Asia for CIA. The War on Drugs in South America is selectively fought against the Cartels who are not in bed with CIA, the ones willing to leave the local CIA vetted government alone. The war in Afghanistan secured the vast Poppy Fields for CIA and its partner, the Pakistani ISI (their CIA).

As it happens, OIL prices do not only dictate profits, they are a major index of WAR. If you review the historical Barrel price of oil from WWII forward, you find a funny thing.  The price of crude will tend to rise to a point where there is a War. It will tend to level and then at the close of the war, it will start to descend. It NEVER descends to a point much lower than half the sum it rose. It then begins to rise, again. When it has risen twice as much as it has fallen, there is another war, and the cycle repeats.  This is the old ‘Two steps forward, and one step backwards’ philosophy of (Communism, the Illuminati, and Fascism) put into formula-matic play.

8  Fascist regime’s ability to survive is directly dependent upon their ability to control, and the means and effort required to control increases in measure with the reduction in or absence of affluence of the lower classes

Thus Fascism MUST become a Police State with Draconian laws. It MUST develop and deploy Political Control Technology to control the hearts and minds of its Citizens. It MUST rely upon disinformation and controlled media as part of that technology. It MUST find ways to hush and eliminate dissent through such control. Thus many of the other Axioms come into play as tools for the purpose.

It need not be an overtly visible Police State. In fact, the more covert, the better. Thus Fascism exists in all forms of government, either operating as a Secret Government in conspiratorial subversion of processes and agencies, or as outright leadership and enforcer.

10 Fascism requires and is built on deceit through secret societies, secret government, and secret activities as tools

The trading of secrets insures loyalty of key players. Intelligence operatives trade such secrets as insurance policies against the Double Cross. Skull and Bonesmen trade such secrets so that they can destroy anyone of their own who dares betray. It is the tool of the keeping and trading of such secrets which itself makes it extremely rare that such secrets are made public. Too many people have too much at stake in the form of a vested interest. The very existence of such secrets, and the need to protect them, means that all else must necessarily be a lie. To conduct affairs amid such lies requires secretive forces doing things covertly. Cover ups abound. Thus media infiltration, manipulation, and Wag-The-Dog damage control becomes paramount.

Where trading of secrets is not sufficient, such as with those who are not anointed, acquiring secrets about people becomes a primary tool in arranging and assuring their cooperation, were they otherwise predisposed to object. Where such is not available, other threats may be required. CIA has repeatedly been caught spying on power brokers in Washington to learn of their sexual or financial indiscretions. Where such cannot be uncovered, it can be manufactured. When a scandal breaks, more than likely, it broke because they refused to cave in. This is how they got rid of Spiro Agnew and Nixon in order to seat Gerald Ford, the man who fed CIA Warren Commission secret meeting content to better enable the cover up of what really happened in Dallas.

Divide and conquer. Labeling. Fear mongering. You see it everywhere. People are encouraged to avoid finding areas they can agree upon, and instead urged to hate and expunge EVERYONE who does not think EXACTLY like them. Diversity is supposed to be an asset that builds nations, one of the key principles behind America’s meteoric rise to power. Yet it has been made weapon against us, and is one reason we are fast becoming a has-been nation owned by the Chinese, Japanese, and Koreans. If you disagree with that, we are undoubtedly bitter enemies by default, and thus so, how can we possibly fight Fascism’s dark plans as they unfold around us?